Why do cats climb trees and tigers can't?

Cats and tigers belong to the feline family, but why do cats climb trees and tigers can't? Let's read the fable below!

Once upon a time when the tiger heard that cats were good at catching mice, he went to learn martial arts from the cat. Cats know tigers are savage and cruel. Animals in the mountain, good or bad, are caught and eaten by tigers. But the cat thought: Tigers are fierce beasts, and I can't afford to offend them, and I want to be the master of tigers, ha! I have the highest status in the mountain. The cat then agreed to the tiger.

The cat thought for a while: I can't teach it all the tricks, I have to save it. Therefore, the tiger only learned to roll, scratch, and bite, as well as various hunting and tracking techniques, but it did not learn to climb trees (cats can climb trees). The tiger doesn't care, it thinks that learning to climb a tree is useless, and a tiger doesn't need to go up to the tree to pick fruit to eat; besides, the tiger's body is so heavy that if it breaks the branches and falls, it will fall to death, so it is better not to learn.

After the tiger has completed his studies, it is even more ferocious. Leopards and wild boars are afraid of it. It wants all the beasts in the mountain to respect it as the king and offers precious small animals for food every day. The beasts had no choice but to do so. As for the cat, he is proud of himself, and he says, "I am the master of the tiger!" When the beasts know it, they come to ask the cat to rectify its bad apprentice, so that the tiger will not do anything wrong. The cat went away arrogantly.

But when the tiger saw the cat, it only called out "Master" softly, not even the courtesy. The cat yelled at the tiger to kneel, and the tiger glared at it and ignored it. The cat was really angry, so it began to scold and teach the tiger a lesson, saying that the tiger should not be evil, cruel, ungrateful, ungrateful, and without conscience... 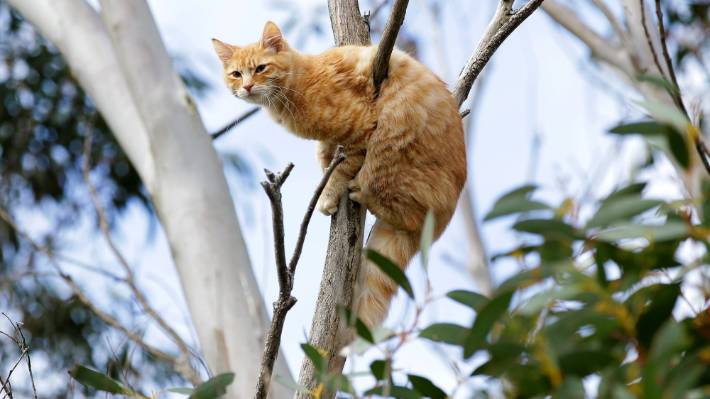 Tiger suddenly got angry and said, "Have you said enough?" "Oops! How dare are you talking to your master like this?" The cat also widened its eyes with anger, but the cat still pretended to be "Master". The tiger swooped at the cat without saying a word, just like a cat swooped at a mouse! Fortunately, the cat is "Master" who knows the way, so he escaped from the tiger and quickly climbed up the tree. The tiger turned his head and looked helplessly at the cat in the tree. So the tiger hated the cat for not teaching it to climb trees. The cat hugged the tree trunk and panted heavily, and said proudly, "Fortunately, I still have one skill left!" From then on, the tiger in the mountain became the king. The cat sneaked down the mountain to take refuge in humans and provoked humans to hunt tigers.